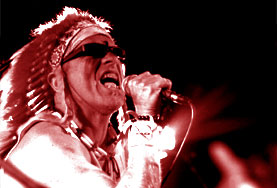 "Musically, they're straight out of inside-out punk. They are a second-generation New Wave band that begins with the Ramones, the Pistols, and Iggy and goes from there. Pretty far from there, too. So slick is their parody and accomplished their use of symbols, you'd think Flo and Eddie were back there someplace pulling the strings." -- David Witz for The Chicago Reader (April 1978)

"I wasn't personally aware of interaction between CU bands and Chicago bands. That doesn't mean there wasn't any ... We went to see some notable Chicago bands when they came to CU. My favorite was the punk outfit Tutu & the Pirates. The most memorable TuTu & the Pirates gig for me was at a bar called Bonni's in Lando Place on 6th St. in Champaign on a Saturday night in 1978. It was frequented by fraternity brothers and sorority sisters who weren't necessarily hip to punk rock. I was with Kenny and Willy Wells (Vertebrat sound man, WPGU DJ, and audio genius) and the place was packed. The assembled regulars had no idea what was about to hit them. First song, TuTuatP launched into "I Got Zits" to the horror of several sorority sisters near us. I remember one's gaping mouth as she yelled "what's this?" Some of the fraternity brothers looked like they'd like to beat up the band. TuTuatP did a memorable version of "I Wanna Be a Janitor" (mom, I got the job) that night. Lil' Richie Spec was in rare form. I believe the opportunity to horrify an unsuspecting audience was a great inspiration to them. Willie and I had to leave early to go do the Roy Bad Show at WPGU. That was the first time I remember wanting to be somewhere else besides the WPGU studios on a Saturday night." -- Roy Axford, The Vertebrats (2006 interview)