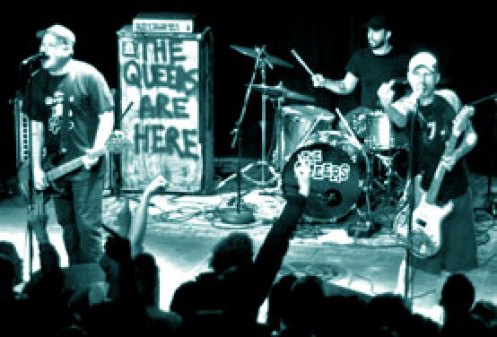 The Queers are a punk band formed in late 1981 by Portsmouth, New Hampshire native Joe King (aka Joe Queer) along with Scott Gildersleeve (aka Tulu), and Jack Hayes (aka Wimpy Rutherford). The band originally broke up in late 1984, but reformed with Joe Queer and a new line-up in 1986. In 1990, the band signed with Shakin’ Street Records and released their first album Grow Up. The album earned the band notoriety within New England, but with the release of their next album 1993’s Love Songs for the Retarded, on Lookout! Records, their following grew larger.

In 2006, after releasing six albums on Lookout!, the band rescinded their master rights from the label, citing breach of contract over unpaid royalties. Later that year they signed with Asian Man Records. The Queers’ cover of “Wipe Out” was featured in the 2007 Columbia Pictures and ImageWorks Studios mockumentary film Surf’s Up, produced by Sony Pictures Animation and National Geographic Films.

The Queers play a Ramones-derived style of pop punk. Much like the Ramones, common lyrical themes are girls, drugs, alcohol and having fun. Musically the band deviates slightly from the driving rhythm guitar sound of the Ramones and augments their songs with harmony vocals, handclaps, keyboards and guitar solos. They have been described as “The Ramones meets The Beach Boys”. Ben Weasel of Screeching Weasel frequently collaborates with Joe Queer to write their songs. The band is well known for the variety of cover versions they include on their records and during live performances. Bands/artists covered by The Queers include The Beach Boys, The Ramones (including a complete re-recording of the Rocket to Russia album), Unnatural Axe, The Nobodys, Angry Samoans, The Mr. T Experience, Skeeter Davis, The Fantastic Baggys, The Who, The Undertones, The Hobos, Tommy James and The Shondells, Helen Love, The Catalogs (from Hawaii, featuring Les Hernandez of The Quintessentials), and many more.

The Queers "Save the World"

The Queers "Cheeto in a Speedo Eating a Burrito"

The Queers "Nightmare to Deal With"

The Queers "Boppin' to the Queers" T-Shirt

The Queers "Beyond the Valley" T-Shirt

The Queers "Save the World" T-Shirt

The Queers "Save the World" Koozie

The Queers "Save the World" Holographic Sticker

The Queers / Antagonizers ATL "Beyond the Dirty South Valley" Poster

THE QUEERS: Save the World Record Release Show