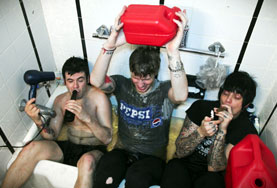 The Ridgelands debut Corey Webster Must Die!!! deliver a powerful and affecting insightful of introspective young and snotty lyrics with charging drums, fast and out of control bubblegum pop riffs with songs about the 1986s skate boarding Cult classic film, Thrashin, which featured Josh Brolin. Merging the umbrella of Green Day, Ramones, Moral Crux, Ann Beretta, and Teenage Bottlerocket. Critical Mass Magazine stated Corey Webster Must Die!!! is " ...An album that's got heart and attitude but isn't produced to be crisp and clean in its sound and style. An album with anthems for the blue collar Americans that still has that crusty dirty feel to it." Critical Mass rated COREY WEBSTER MUST DIE!!! 4/5 stars. Check it out.

The Ridgelands "Corey Webster Must Die!!!"