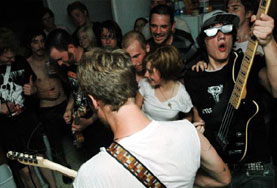 he Night Brigade formed in late 2008 in Normal, IL on the campus of Illinois State University out of a thriving DIY scene made up of drunken, sloppy, wild, packed shows in basements, kitchens and garages in several houses in the area. The DIY shows in Normal bring in touring bands from all over the country and it only makes sense for a few bands to come out of that environment, as well relocating the band to the hot summers of Chicago full time. The Night Brigade's debut E.P. was released in the summer of 2009, which was a busy year for the band, including a string of Ease Coast and Midwest dates, including a Warped Tour appearance and a couple of motorcycle rallies, including Sturgis, South Dakota as well as playing with The Bouncing Souls at their Home For The Holidays festival in Asbury Park, N.J. 2010 was a slow year for The Night Brigade, but with a fresh batch of songs that have yet to be released, some new transportation and way too much time off 2011 is shaping up to be a fun and busy year.

The Night Brigade "Self Titled"

The Night Brigade "Save My Soul"

The Night Brigade "I Rode Mine (Sturgis, North Dakota)"

The Night Brigade "Welcome to the Neighborhood" T-Shirt

The Night Brigade "Save My Soul" T-Shirt

Thanks for contacting us! We'll get back to you as soon as possible. Thanks for subscribing
WAREHOUSE SALE!!! Vinyl, Cassettes, CDs, Clothing and More!!!