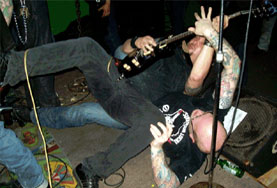 Milwaukee's working class punk rock and rollers the RUST BELT DEMONS can best be described as the bastard child of rock and roll! While heavily influenced by an eclectic mix of originals like Buddy Holly or proto-punks Iggy and the Stooges, Brit rockers the Clash and the Dead Boys, and early 80's hardcore acts like Minor Threat and Angry Samoans, and most of all, their beloved Ramones, the band has managed to forge a distinct sound, blending many genres and styles into a cohesive and classic feel.

Standing on the shoulders of such giants as these, it's no surprise that the RUST BELT DEMONS have grown to become Milwaukee's most dangerous band! Notorious about the scene for highly energetic, drunken on-stage disaasters, the RUST BELT DEMONS pay tribute to their working class roots by waving the flag for organized labor with songs about the struggle for survival in the aftermath of the "me" generation of the 80's and 90's. The older fans relate to the traditional melodic and political sensibilities that the band takes on, and younger crowds absorb the electric energy and youthful urgency that RUST BELT DEMONS bring forth.

While most of the punk scene is saddled with mediocre '77 rehash groups and gimmicky weirdo acts, when flavors of the week come and go, RUST BELT DEMONS have managed to survive and thrive by staying true to their principles of making music their way and on their own terms. The band's talent and vision have not gone unnoticed, as the band has procured a loyal fan base throughout the Midwest.

After a series of lineup changes from the basement years in 2008-2009, the RUST BELT DEMONS have settled in with a strong lineup and released "Local 77" on Working Class Records, an new imprint of Squigtone Records (Headwound, Hudson Falcons,Squiggy, The Oi! Scouts, and The Boils) in January 2011. Since then, the RUST BELT DEMONS have been touring in support of their debut album and are currently writing for the first installment of SEXY BABY RECORDS' "Never Mind the Singles... Here's the Flexi Babies" 7" flexi box set, DUE OUT SOON!