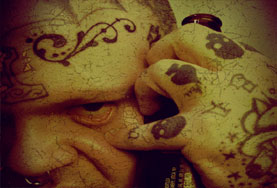 Drunk motherfucking one-man hammer storm from the backwoods of New Hampshire. The frontman from New Hampshire's premier psychobilly band, Genuine Rust, is back with some Hasil Adkins-guitar strummin', kick drum stompin', howlin', and growlin' all at once for the ultimate clusterfuck.

From deep in the dark mountains of Assgard, a gluttonous tyrant emerged and promptly declared himself The Supreme Sodomessiah of Everything. After only a few minutes of his reign over the land, his unhealthy obsession with booze and plus-size women began growing out of control. The filthiest wino gazed upon him with disgust. The most depraved pervert felt ill in his presence. After a carefully calculated coup d' tat, the fiend was thrown into a vortex and spent aeons banished into the yawning emptiness until eventually being reincarnated on the planet Earth. Unfazed by this fate, he set out once again on a new quest for world domination. Through paint, musical noise pollution and tattoo, he continues to spread his blackened wings across the horizon and poison the world with his sinful ways. To this very day, he remains a tyrant. A barbarian.

Barbarian motherfucker. Will draw on you for money. Will play "music" anywhere that has beer and fat chicks.