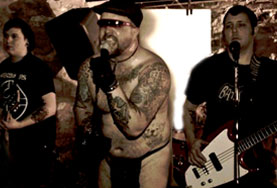 Modern Day Rippers, from Chi-Town a.k.a. the only town, was formed in the fall of 2008. The line up is: Tommy (drums), Richard Bastard (bass), Chris Shitface (guitar) and Germ (vocals). The band's initial goal was to bring back a forgotten style of music with a new twist and have fun doing it. Modern Day Rippers have no releases out currently, but if you like Germ's voice check out Rotten Fruits 7" "Abomination", or Bastard's bass check out Hotlips Messiah "Mutants Unite" CD. That's right this is a Chicago punk super group of sorts. Actually it's just friends who wanted to play together and have fun together. Modern Day Rippers make their stage debut June 09 with much anticipation. The band looks forward to recording their demo in Oct. 2009 "Rip It Up In a Modern Way!" Get ready for the new wave of no future babies!

Modern Day Rippers ‎"Rip It Up In A Modern Way"

Modern Day Rippers "Rip It Up!"