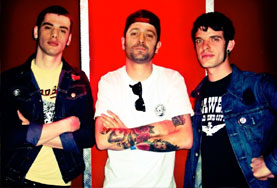 From Rome, Italy, jerkin' around since 1999 with different line ups, they released their first album called "Monsters behind the screen" in 2003 after a couple of european tours, a 7" called "Weird tales of a broken heart", a split cd with bands like Flamingo Nosebleed, Murderburgers and Kinkies called "Revenge of punk rockers" and a split 7" with THE QUEERS celebrating their second italian tour with the Joe King's band. They shared the stage with bands like NOFX, QUEERS, BUZZCOCKS, TOY DOLLS, AGENT ORANGE, HANSON BROTHERS, TEENAGE BOTTLEROCKET, MUFFS, PARASITES, HARD ONS, MANGES and many many more. They just finished to record their brand new full lenghth called "Planet of the apers" out soon in 2013.

KILLTIME "Planet of the Apers"