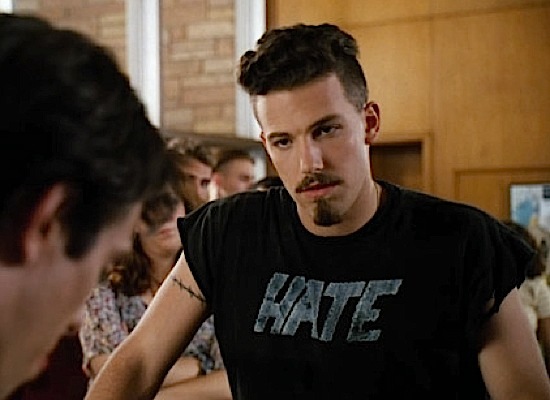 Glory Daze is a 1995 American independent comedy film written and directed by Rich Wilkes and starring Ben Affleck, Sam Rockwell, Megan Ward, and French Stewart. It also features John Rhys-Davies, Alyssa Milano, and Spalding Gray in supporting roles. The plot concerns five college housemates in Santa Cruz, California who are facing graduation and make an attempt to prolong their carefree lifestyle before going their separate ways. Matthew McConaughey, Meredith Salenger, Matt Damon, Brendan Fraser, and Leah Remini all appear in minor roles. Music for the film was composed and selected by members of the punk rock band The Vandals, and the soundtrack features several punk rock bands of the era.

22 year-old Jack Freeman is graduating from the University of California, Santa Cruz with a degree in art, and is hurting from a recent breakup with his ex-girlfriend Dina. He shares a house called "El Rancho" with four friends: Rob is also graduating, and preparing to move to Los Angeles with his girlfriend Joanie, though he is worried about settling down and living so close to Joani's mother. Dennis is a perpetual student with three degrees who, after six years at UCSC, is moving on to an MBA program in Michigan. Mickey is a cartoonist with a year of college still to go, and has feelings for their friend Chelsea but is too shy to reciprocate her affections. Josh, aka "Slosh", had a promising academic future but failed out of college in favor of a life of drinking and working a series of menial jobs.

Art professor Luther criticizes Jack's final sculpture project for expressing an uninteresting, suburban, middle-class worldview, but praises Dennis' thesis—a photo-essay of Slosh getting drunk and working at dead-end jobs—and offers him an apprenticeship; Jack suggests that this is only because Luther has a homosexual attraction toward Dennis, a notion Dennis dismisses. Not wanting their college days to end, Jack convinces his friends to postpone their respective plans and stay at El Rancho for another year. They celebrate the decision by throwing a party, at which Chelsea, tired of her feelings for Mickey going unrequited, makes sexual advances toward Jack. He turns her down, and she leaves the party embarrassed. Rob gets into an argument with Joanie, causing her to leave angrily.

After the commencement ceremony the next day, Rob reconciles with Joanie and meets her mother, and they end up getting along. Jack argues with his parents over his future, and they leave abruptly. Jack encourages Mickey to pursue a relationship with Chelsea. Luther makes a pass at Dennis during a faculty luncheon, confirming Jack's suspicion about his ulterior motives. Dennis and Jack vent their frustrations with Luther by cutting down a totem pole that his sculpture students spent two semesters creating.

At a beach bonfire that night, Slosh tells Jack that it was Jack's carefree attitude that inspired him to give up on college, and that he does not regret his decision because he no longer fears what the future may hold. At Slosh's encouragement, Jack attempts to win back Dina, but she rebuffs him. Back at El Rancho, Mickey admits his feelings to Chelsea, and the two share a kiss. Jack and the others realize that they should not really stay another year, that it is time to move on with their adult lives. To preserve their memories of the house and prevent any future residents from despoiling it, they proceed to smash their furniture and belongings, culminating in the destruction of the bar counter that they had built together.

The next day, the five friends go their separate ways: Rob leaves for Los Angeles with Joanie, Dennis heads off to school in Michigan, and Mickey and Chelsea begin dating. Slosh moves in with a group of new students he has befriended, and hangs the El Rancho sign on their house. As Jack leaves town, he stops at a restaurant where Dina is eating with her new boyfriend, and writes "angst for the memories" on the window as a farewell message to her.

Ben Affleck as Jack Freeman, the film's main character, who is graduating from the University of California, Santa Cruz and lives at "El Rancho" with his friends

Sam Rockwell as Rob, one of the El Rancho housemates, who is also graduating

French Stewart as Dennis, an El Rancho housemate and perpetual student who has spent six years in college and earned three degrees

Vinnie DeRamus as Mickey, an El Rancho housemate and cartoonist for the local newspaper

John Rhys-Davies as Luther, an art professor who Jack and Dennis study under

Alyssa Milano as Chelsea, a friend of the El Rancho gang who has a crush on Mickey

Affleck, Rockwell, Ward, and Stewart received top billing for the film, both in the billing block and opening credits, while Rhys-Davies, Milano, and Gray are listed as "special appearances". The theatrical film poster, however, advertised Affleck, Milano, and Stewart as the film's stars. Meredith Salenger is also credited with a "special appearance" as a fan of Mickey's comic strip. Several actors who later became stars in their own right had small roles in Glory Daze, including Matthew McConaughey as a rental truck salesman, Matt Damon in a non-speaking role as former El Rancho housemate Edgar Pudwhacker, and Brendan Fraser and Leah Remini as a couple who Jack argues with on a bus. Other small roles were played by Sean Whalen as a flunky, Jay Lacopo as the bus driver, and Alfred Sole as a fisherman.